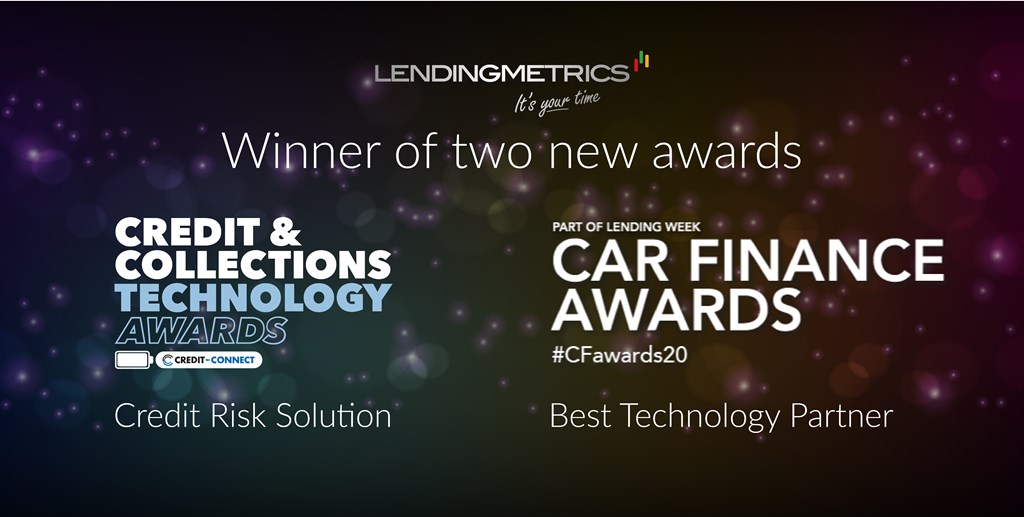 Yesterday was a busy afternoon for awards organisers, as we saw both the Credit and Collections Technology Awards and the Car Finance Awards held as virtual events. LendingMetrics are proud to have received an award at each of the events, showing their recognition across the industry.

The Credit and Collections Technology Awards 2020 was an exciting virtual event, hosted by Credit Connect’s Colin White and celebrating excellence in credit, lending and collections innovation. LendingMetrics are proud to have won the Credit Risk Solution award at the event, as well as being awarded with a special star award for consistent innovation in this sector by winning for the fourth year in a row! LendingMetrics’ Auto Decision Platform (ADP) is certainly the credit solution that everybody is talking about. It has been recognised numerous times with awards and delivers real-time decision making with massive cost savings.

At the Car Finance Awards, LendingMetrics were delighted to win a second award of the day: the Best Technology Partner award. As sponsors of the event, LendingMetrics were asked to present some of the awards categories, and their very own Georgia Pullen enjoyed awarding worthy winners in 3 of the categories, including the last two of the evening. The online event was hosted by comedian Ivo Graham, and featured as part of Lending Week during Credit Strategy’s Credit Festival. Founded in 2016, the Car Finance Awards have since grown to become the only awards programme to connect dealers, lenders and brokers, celebrating success across the industry. Ivo Graham provided great entertainment for the event, congratulated LendingMetrics for their recent 10 year anniversary and praised their celebratory video featuring notable clients popping champagne to commemorate the occasion. In case you missed it, you can watch the video here.

About the events, Director David Wylie said: “we’re thrilled to have been awarded with not one but two awards yesterday, and it’s great to see our groundbreaking technology continually recognised by expert judges in multiple sectors”.

With two more awards under the belt, LendingMetrics is fast becoming one of the most widely recognised technology partners in the industry. To find out what all the hype is about, get in touch with us at info@lendingmetrics.com or book a demo today!