Do you manage your risk, as well as the England football team did?

Last week England played Belgium in the last game in Group G. Prior to the game both teams had already qualified for the next round of the tournament and as such, Belgium and England both effectively played their B squads. The final score for the game was 1-0 to Belgium. Belgium will now face Brazil and then go on to play either France or Uruguay in the Semi-Finals. Nevertheless most people would agree that England could have performed better against Belgium, especially with some questionable shooting from some of the England players and only 2 shots being on target. However, we have to wonder if England had planned to “lose” the game on purpose and if this was all part of Gareth Southgate’s plan to maximise England’s chances of reaching the World Cup final.

Based on the FIFA World Cup- All-time rankings we can see Brazil have the highest rating followed by Germany, Italy, Argentina, Spain, England and then France. As such, England losing against Belgium was arguably a good play by Gareth Southgate as France, Argentina, Portugal and Brazil are all very strong teams and are certain to contain England’s strongest competition in this stage of the tournament. Although Spain, Portugal and Argentina have since departed, the big dangers of France and Brazil remain in that other half of the draw. 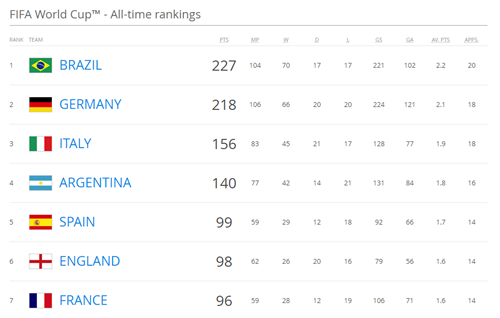 If we now look at England’s previous performance against the other teams in each stage (last 4 games played), we can see that both stages were near equal with England having similar past performance on the right and left side of the draw. With some big names out of the tournament already and some bigger names likely to play against each other, on paper at least, England may actually have a good chance of reaching the finals and maybe even winning the tournament. But like all of the best credit risk strategies, we must bear in mind that unpredictable variables may catch us out!

Left side of the Draw

Right side of the Draw

If we then consider the bookie's odds, England were 16/1 to win the world cup with a 5.88% chance, at the start of the tournament. England as of last week were 15/2 to win the world cup with an 11.76% chance and yesterday they are 11/2 to win with a 15.38% chance. So by looking at those statistics, England are slowly becoming more of a favourite to win, now only behind France and Brazil. Now if we compare this to the other team’s routes and odds we can see the following percentages for each team winning the tournament below (Percentages based on Bet365 odds 02/07/2018).

Right Stage of the Draw

Left Stage of the Draw

Based on the bookie's odds we can see that England’s stage of the draw, with Spain now out, has become a lot less competitive, with the main competition likely coming from Croatia, which have an equal chance of winning the tournament as England. However, based on Croatia’s performance against Denmark, with some very sloppy goals and the game finishing on penalties, we would say England shouldn’t have too much to worry about. On the left stage of the draw, England would have had strong competition from France and Brazil and possibly Argentina or Portugal if they had qualified to the next stage. If England, make it through to the finals then we may be facing either Brazil or France. Although, one important thing to note is that past performance is never a guarantee of future performance, with Spain losing to Russia on Penalties as a prime example.

Gareth Southgate has appeared to manage England’s risk very well if he intended to lose the Belgium game, by playing a weakened team and now as a result England will go on to play and hopefully beat Colombia. If all goes to plan, then England will go on to face Sweden and then Croatia, however, this is the world cup and anything can happen.

Our team are fanatical about helping to work out and manage risk and have enjoyed this bit of fun, analysing the work of Gareth. They also enjoy building some of the best technology to help you beat the odds and manage your risk through automated risk decisioning and analysis. We hope you enjoyed reading our view of the current world cup status and we would love to help work out your best route to success!