Fair for You (FFY) is a new, award-winning alternative to weekly payment stores. As a not for profit organisation the consumer purchases items such as white goods and bedroom furniture directly from FFY suppliers by taking out a loan with them and repaying in flexible instalments. FFY state that applicants only pay what they can afford, when they can afford it and the faster they pay it off, the less they pay. FFY are a not-for-profit Community Interest Company (CIC) and members of Social Enterprise UK, they state their product is supported and designed by the consumer and that they are using the power of business to bring about social change.

Since 2011 LendingMetrics, a credit reference agency authorised by the FCA has been a leading provider of unique real-time data to alternative lenders to assist with the prevention of fraud and to enhance live credit risk decisions. In partnership with Equifax, LendingMetrics can also simultaneously deliver credit, bank, income verification and anti-money laundering checks. They also provide the recently launched “Free Forever” OpenBankVision platform, which delivers 90 days of real-time granular applicant bank account data with unrivalled industry knowledge and categorisation analysis to deliver the most powerful affordability and anti-fraud product available, free of charge.

In 2016 following 3 years R&D the company introduced ADP (Auto Decisioning Platform) revolutionising the opportunity for the financial services sector to quickly deliver increased volume with reduced overhead, using automated lending decisions. ADP utilises proprietary data solutions and is also openly connected to all major CRA’s plus many other 3rd parties. ADP is a powerful decision engine builder that puts the lender in control of credit rule changes and allows operational/credit risk staff to control changes in real time through a simple user interface. 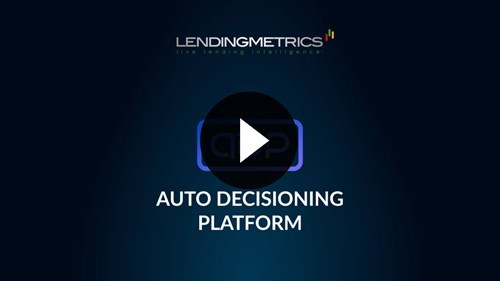 LendingMetrics were appointed by FFY to implement ADP to support FFY in their plans to significantly grow their loan book.

Fair For You had their own in house Credit Risk Team, who designed their decision engine using Call Credit’s core bureau products and also LendingMetrics BankVision product to collect 90 days of bank statement data. Their aim was to design a decision engine that could automate as many decisions as possible, delivering good quality leads into the underwriting team so that agent workflow could be driven by tasks from ADP, and thus improve productivity.

Following several meetings and calls between FFY and the LendingMetrics project management team, the requirements gathering phase was completed and the implementation team took the lead. LendingMetrics took 6 weeks to complete the seamless build of the decision engine, (as they also added a new CallCredit component to the platform) before passing FFY the finished ADP decision engine for Acceptance Testing.

During the implementation phase FFY were also working with the LendingMetrics analytics team to complete a free retro analysis on their LMX (Equifax) products to investigate the possible benefits of adopting a multi- bureau approach and discovering the possible uplift that such a move may provide. LendingMetrics are familiar with all aspects of automated decisioning and versed in multi bureau data sources, so they were perfectly placed to help FFY look at implementing a multi-bureau approach They completed the analytics over the Equifax retro, sharing their findings and results and even designing a bespoke scorecard.

FFY decided to complete the project in phases, initially implementing their decision engine exclusively with CallCredit data. This facilitated a faster ADP launch with a view to revisiting the multi-bureau model later in 2018.

FFY UK successfully launched and importantly, now have a decisioning model which is highly scalable. ADP was delivered on time and within budget without any upfront fees from LendingMetrics, making the award winning (“Credit-Connect Best Credit Risk Solution 2018”) platform a cost-effective solution without compromising on functionality.

FFY have successfully migrated to ADP with minimal business disruption and are now enjoying the benefits of real time credit risk decisioning. FFY and LendingMetrics are both looking forward to working together on phase 2 of the project and combining their skill sets.

“We were excited that this ADP appointment took us into yet another sphere of lending within the retail sector, with ADP now implemented across many different markets.”